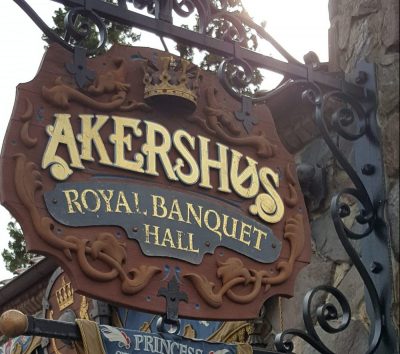 If you’re like me, you typically eat the same four or five breakfast meals over and over: toast, eggs, cereal, and oatmeal. Well, when I’m away on vacation, the one thing I allow myself to indulge in is breakfast. And indulge I do.

On our recent trip to Walt Disney World in April I could not get enough of their breakfast potatoes. Whether it was in a cheesy casserole, or baked muffin-style (I’ll write about those another day), I loved them. And all of them gluten-free.

My absolute favourite breakfast potato dish though was at Akershus Royal Banquet Hall at the Norway pavilion in Epcot. This was our first time dining at Akershus and we chose to go for the Princess Storybook character experience at breakfast.

Akershus is a unique dining experience in that it’s both a buffet and a family-style meal. They have an extensive buffet set up with assorted meats and cheeses, pastries, cereals, bagels and more. On top of that, a family-style platter is delivered to your table complete with eggs, sausage, bacon, and breakfast potatoes. And as if that isn’t enough, there are gluten-free waffles, muffins, and hash browns available to order.

Thankfully, there is an allergy-friendly menu to walk you through all the items and as always, you have the option of talking directly to the chef if you would prefer or if you have questions.

While everything on the breakfast platter was safe for me to eat, I also ordered the gluten-free waffles. Much to my surprise though, these were not the usual Mickey-shaped gluten-free waffles that I was used to at Walt Disney World and they certainly weren’t as tasty.

They were cold and tasteless…oh, and they came alone on the plate. Unlike at other Disney restaurants, the waffles did not come with their own little pitcher of maple syrup. I’m not sure why they were different but after a couple bites, I opted to pass.

Then I discovered the potatoes. Incredible! Creamy and hearty, topped with cheese, I could not stop eating them.

Definitely one of the better potato dishes on property!

Once back at home, and after returning to my regular breakfast routine, I could not stop thinking about the creamy goodness I’d enjoyed. I decided to try to duplicate the potatoes at home. Thankfully, having spent a number of vacations at Walt Disney World, I had collected a few Disney cookbooks over time, so I turned to those.

Sure enough, one of them contained my beloved Cheddar Breakfast Potatoes recipe.

I must admit they turned out quite well but were not exactly the same.

Maybe it was the illusion of eating them in a castle that was missing, or the absence of princesses parading around my kitchen table, I’m not sure. But I do know that every last bite of them was loved both by myself and the rest of my family. Even without the princesses.